Xamarin Vs Cordova: The Comparison You’ve Been Looking For!

Xamarin Vs Cordova: The Comparison You’ve Been Looking For!

by Emad Ibrahim
in Development
Comments

Cross-platform development is touching the heights of its popularity these days, as mobile app developers try to utilize the largest user-base and options like Cordova or Xamarin are there to do their magic. Cordova and Xamarin may appear to be one and the same, but technically speaking, they are quite diverse when comparing their approach, performance and end result.

In order to compete in this booming marketplace, companies associated with the business of mobile app development have no choice but to deliver apps to a maximum number of platforms. Since iOS and Android are now dominating the mobile market, therefore, these platforms are on the priority list.

Generally, there are two basic approaches when it comes to cross-platform mobile apps. You may either write a web app wrapped as a native app by using an embedded browser control, as in the case of Cordova or you can make native apps by using a cross-platform tool such as Xamarin.

You can create an app by using a cross-platform. However, it may not be clear whether it will perform in the desired manner or if you will get a neat and flawless interface. With a view to giving you a clear picture, we are giving you a comprehensive comparison between Xamarin and Cordova. This will assist you in picking the right app development platform in regards to your particular needs.

Xamarin assists .NET developers in utilizing already available code, tools, and libraries and enables them to use their C# programming language and .NET skills to fabricate mobile applications for iOS and Android-based smartphone devices. In addition, better UX functionality and performance is another perk for Xamarin users. Its compliance with the native code and provision to access native APIs via C# wrappers allows the creation of well-written and fully native apps.

In other words, Xamarin is an ideal option when a native language is not available. Its ongoing support is a blessing, and allows app developers to modify and add new features with reference to the changes introduced within native technology over the passage of time. Although it is not an easy task to keep up with the constant changes, Xamarin has proved to be quite effective in this respect.

Xamarin is the ultimate choice for the C# programmers who don’t have an interest in learning other programming languages for the sake of Mobile App development. Moreover, the developers using Visual Studio can keep the best IDE for developing Web Apps, Windows or mobile Apps.

Cordova gives you the freedom to handle cross-platform development by using basic web technologies including JavaScript, CSS3, and HTML5. It works by using wrappers, aimed for the independent platform, and depends on API bindings (standards-compliant) to access the sensors, network status, and data of each device. These wrappers normally work as the native Web Views of a platform. This feature may either be considered as the greatest strength or the greatest weakness of Cordova.

Being a set of device APIs, Cordova allows a mobile app developer to seek access to the native device functions such as accelerometer or camera through JavaScript. When using a UI framework like Dojo Mobile, Sencha Touch or jQuery Mobile, Cordova permits a developer to develop a Smartphone app with just JavaScript, CSS, and HTML.

By utilizing standard web technologies controls, Cordova provides a comfortable environment for web developers looking to strengthen their skills to create a mobile app. It also provides a single code base across all platforms, which is a selling point against native development. However, despite this fact, it only manages to earn a slight edge when comparing Xamarin development.

Which one is the Best? 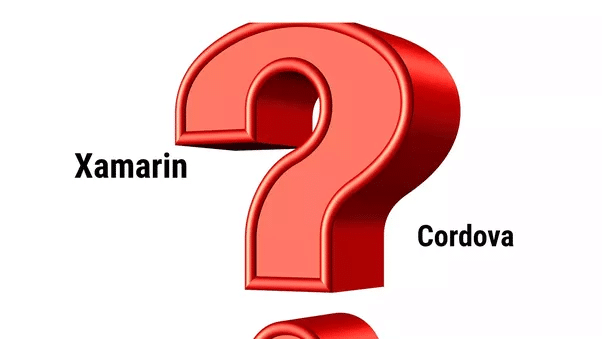 The answer to this question depends largely on the particular requirements of the mobile app developer. Overall, Xamarin is a powerful and comprehensive platform for an ideal debugging and tooling experiences. Yet there is a downside, as new mobile app developers will have to undergo a steep learning process. Besides learning the C# and Xamarin toolchain, the developers should also have reasonable knowledge about the iOS and Android platforms.

Cordova allows you to create simple apps quickly, but this is not a strong point in some cases. In other words, you can say that creating a native application may take less time with Xamarin as compared to making it with Cordova. It can work flawlessly if the developer can easily handle frontend development.

When it comes to support, Cordova offers the assistance of a large online community as compared to Xamarin. It is not only large but turns out to be quite vigilant while resolving the general issues faced by the developers. Although the support offered by Xamarin has been growing positively and works perfectly, Cordova steals the show in most circumstances.

The use of basic web technologies by Cordova allows web developers to work in a relaxed environment. Especially, those who want to polish their skills with reference to creating a mobile app. In addition, it renders a single code base throughout all the platforms. This particular feature is surely the selling point against native development. But, it only gives it a slight edge against Xamarin development.

Going deep into comparison, the use of HTML as a rending platform is the biggest disadvantage of Cordova. HTML web pages are unable to access native interface transitions or elements. You need to either develop a plugin or get assistance from pre-written Cordova plugin or a third-party UI library. Normally, third-party library, particularly those implemented in pure JavaScript may incline towards any of the platform UIs but UIs native to the target platform are not accessed. It would not be easy for Cordova to leverage popular native platform interfaces and cross-platform, both at the same time.

While reaching the verdict, it may be stated that using native user interface elements and APIs of a platform is always recommended when making a user-installed app. This option is not available with Cordova, which lowers its worth. So, in order to get best-in-class and high-level performance, pure native development or Xamarin may serve the purpose for most of the mobile app developers.

Emad is a software developer, entrepreneur, and passionate technologist. He has created several SAAS products and is an open source contributor. He has worked in positions of leaderships with several consulting and software development companies large and small including Accenture, Frontpoint Security and Optimal Solutions. Emad is also a published author of ASP.NET MVC and Test Driven Development.